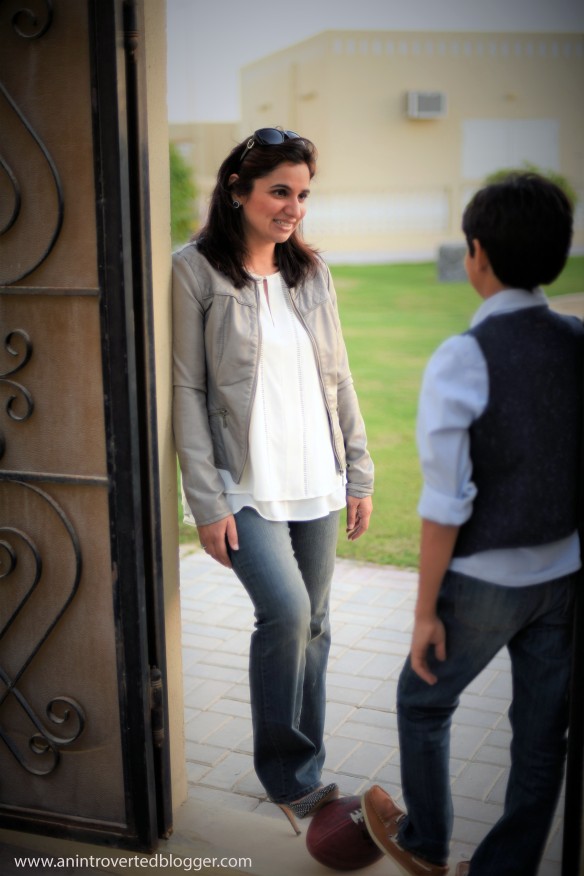 Yesterday I took the day off! I was done. I needed a break from this ‘mom gig’ I have going. I would find a quiet corner, read my book, blog, have some tea, and make summer plans (that didn’t actually involve sitting in a plane). Unfortunately, it did not quite pan out as I had anticipated. But it sure did sound good in my head.  Even so, I did attempt it, and told my kids, ‘Mama is off today. Don’t call me. Don’t ask me any questions. I don’t exist today’.

My son, who is morphing into a teenager soon, and I – get along very well. Wait, let me rephrase that. We did get along very well. Lately though, I don’t know what it is, but things are – let’s just say different. He talks when he feels like it, he is harder to sway when he has formed his opinion, his relationship with his sister falls into the ‘love/hate’ category and his whole room is a school-projects-due-tomorrow zone!

Monday after school pickup in the car.

‘How was school’? (I’m eager to know how the day went. My son has been out of the house for 7 hours!)

Silence. He looks out of the window as I drive home. ‘Fine’. He grumbles incoherently.

Are we not talking today? I guess not. We drive home in silence. I try to initiate conversation again.

No guesses. Just a shrug of the shoulders.

That is my cue to keep quiet for the rest of the ride home, and just crank up the radio. #onesyllableresponses

Tuesday after school pick up in the car.

My son gets in, and I mumble a quiet ‘hello’. No questions about school today! I will just maneuver my way through the bustling Doha traffic and drive home. Quietly.

‘Mama! Guess what happened in D.T. today??! You’ll never guess. This guy in my class was using the ‘hegner’ machine that cuts the medium density fibreboard – remember I told you about it. Don’t confuse it with the electric fret saw – well he almost cut his finger off using it! But the teacher was there – before you start panicking! Everyone started screaming. So cool!!

I guess we are talking today, then? #longschoolstories

Wednesday during morning drop off

The sun is shining, the traffic for a change isn’t bad either, we are doing good for time. I revel in the fact that after drop off, I’ll hit the gym, grab a coffee with my girlfriends, and try out that new cookie recipe I came across last night. And then it hits- like the turbulence you feel while flying over the Atlantic. Mild at first, but you know there is more where that came from.

Mom, I have to hand in my Geography project this week -I’m not sure, could be due tomorrow. I need foam boards, scrap wood, a glue gun and some other supplies so I can make a contour model of the Andes mountain ranges!  Can you get me all the project supplies today?

Sure. I’ll look into my arsenal of craft supplies and have all that ready for you!! Whatever happened to planning this stuff out! #crazyschoolprojects

My son is 12. It feels surreal to say that. Almost a teenager! How did that happen? When did that happen? Am I prepared for this? Probably not, but I’ll be damned if I don’t try my best to nail this ‘mom gig’.

Though things are different, we still enjoy our moments. He is becoming his own independent person, yet I still get to tuck him in at night. That is when I hear about his school day and how the dynamics of his class is working. Also who he is getting along with this week. Granted I am drained and exhausted by 8pm, but that’s when he talks. So I listen.

Disclaimer: No feelings were harmed in the sharing of this post. My son read through it, before I was allowed to publish. I’ve used a hasthtag where ever I could, because, come on people, that’s how it’s done now! Get with the program! #coolestmomever #bestsonever